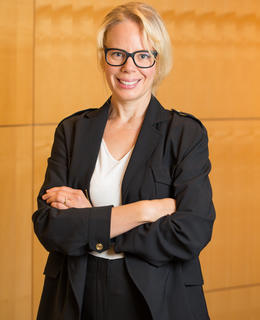 Anna-Maria joined the Faculty of Law in 2015. She is also an Associate Fellow at the Institute for Science, Innovation and Society (InSIS) at the University of Oxford.

In addition, she is currently completing her doctorate at the University of Bremen, Faculty of Law, where she was awarded a research associate position through the Bremen International Graduate School for Marine Sciences (GLOMAR) and MARUM Centre for Marine Environmental Sciences from 2010 to 2013. Her doctoral research examines progressive developments in the regime for marine scientific research under the law of the sea, primarily with a view to understanding its legal and practical implications for advancing the protection and preservation of the marine environment.

From 2013 to 2015, Anna-Maria worked at the Institute for Advanced Sustainability Studies (IASS) in Potsdam, Germany.

Anna-Maria is the Principal Investigator for the Geoengineering Research Governance Project (GRGP), a joint initiative of the University of Calgary, IASS-Potsdam and the University of Oxford. It seeks to enhance understanding about the complex issues posed by proposed geoengineering techniques, and to analyse the changes required in governance and legal frameworks necessary to enable effective oversight in this space in line with accepted principles.

During her tenure at the IASS, Anna-Maria worked in an interdisciplinary research group studying the implications geoengineering interventions in the global environment, mainly for the purpose of counteracting climate change. In connection with her research examining the regulation and governance of this array of technological proposals, she has acted as a consultant and provided information and advice to governments, treaty bodies and intergovernmental organisations, NGOs, and scientific institutions on this topic. Since 2013, she has served as advisor to the International Union for Conservation of Nature (IUCN) and delegate at the meetings of the 1972 Convention on the Prevention of Marine Pollution by Dumping of Wastes and Other Matter and its 1996 Protocol (known as the London Convention and Protocol).

Anna-Maria has received diplomas from the Rhodes Academy of Oceans Law and Policy in 2010, and the International Tribunal for the Law of the Sea (ITLOS) Summer Academy in 2012.

Energy innovations for today and tomorrow